Strategies for the Global Market

On 20th February 2016 the British Prime Minister announced that an in/out referendum on the UK’s continued membership of the European Union would be held on 23rd June in the same year. The die was cast for an extraordinary period of British, European and even global economic history which combined political chaos with a prolonged state of Brexit stasis in the United Kingdom and unprecedented uncertainty for businesses from around the world operating in the UK and the EU.

Within this emerging and dynamic context the Outside Fortress Europe Research Project was initiated by Colin Edward Egan, Management Academic and Business Advisor, to build upon the research of the already established Strategic Management Think Tank, an organizational discussion forum exploring global business and marketing strategies in developed and emerging markets.  The project has its roots and development in advanced MBA electives on subjects including International Business, Global Business Strategies, Marketing and Organizational Behaviour alongside ongoing longitudinal research into the practical challenges faced by companies of all sizes engaged in international trade.

The resulting publications from the initiative provide a collective ‘sequel’ to the Economist Intelligent Unit/Addison-Wesley commissioned 1993 book, Inside Fortress Europe: Strategies for the Single Market, co-authored by Colin Edward Egan and Peter McKiernan. That text explored the contrasting strategies of Japanese, American and European companies as they prepared for the formation of the European Single Market which came into effect on 1st January 1993, the UK being one of twelve countries within the newly-created trading bloc, the European Union.

The old and the new publications – the ‘In’ and the ‘Out’ – are profiled below along with links to further information within this website relating to Outside Fortress Europe: Strategies for the Global Market. 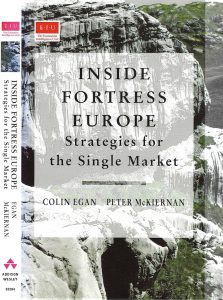 In 1992 this book was commissioned by the Economist Intelligence Unit (EIU)/Addison-Wesley as the then twelve European Community member states prepared for the European Single Market which came into effect on 1st January 1993.

The text examined the principles of global business strategy alongside a discussion of the political and economic processes involved in the creation of the European Union and the European Single Market. It also presented case studies demonstrating how American and Japanese companies were proactively preparing for the new market environments they were facing. With few exceptions, notably German companies (and especially smaller Mittelstand firms), European companies were cumbersome, excessively parochial and wasted way too much organizational energy on seeking market protection (hence the ‘fortress’ title) rather than competing aggressively.

Acclaim
Academics who teach economics and business studies can easily become outdated in areas outside their own research. We also prefer to slot events into preferred paradigms and set aside those facts and developments which threaten our traditional modes of thinking. Here we have an up-to-date work with a balanced approach that can be quickly absorbed and is packed with insights into the practice of modern multinationals, particularly Japanese concerns. The authors write from a strong belief in classical liberal economics, and from this a belief in free trade. In this Smithsonian tradition, the sceptre of protectionism is ever-present… For the busy manager here is a book worth the trouble of reading. 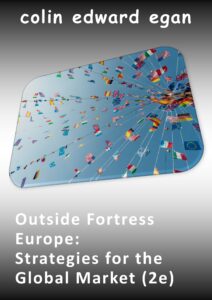 Twenty-five years after the publication of Inside Fortress Europe it seemed appropriate to reflect on the UK’s momentous decision to leave the now enlarged twenty-eight Member State European Union.  The country had elected to embark on its new international trade adventure in the context of a markedly different global business environment which had evolved since the excitement of the infamous ‘1992 Process’ towards greater European economic integration which had begun in the late 1980s.

This ‘sequel’ to Inside Fortress Europe: Strategies for the Single Market was published in December 2018 and updated and revised in October 2019 as Brexit events and EU processes bobbled along, apparently aimlessly. A second edition was published in December 2021. It has been completely updated, building upon extensive feedback from leading experts in the disciplines/subjects/topics explored and user insights into the effectiveness of the book in meeting their goals.

The principal focus of the book is to cover a broader range of subject areas than would normally be found in a single management or business studies textbook, the intention being to provide a cross-functional, multi-disciplinary perspective on the challenges of ‘organizational life’ and strategy development in a highly competitive and complex global business environment. Its discussion relates to companies from all countries, of all sectors and of all sizes and its chapters provide evidence-based principles, frameworks, methodologies, processes and tools to guide the inquisitive manager in developing and leading the Intelligent Company.

Outside Fortress Europe: Strategies for the Global Market is a book written for an experienced, inquiring manager audience and/or an MBA/post-MBA/DBA/PhD readership.

Accessibility, relevance and an integrated perspective based upon an objective and updated assessment of key debates in management science are once again presented throughout the book.

Please click/tap the Outside Fortress Europe: The Book tab on the Main Menu for detailed information relating to each of the book’s chapters and Appendix One, Milestones in the History of Globalization.  A link is also provided to a detailed Table of Contents which can be viewed in a new browser tab/window and/or downloaded as a PDF document.

The Outside Fortress Europe research project

Outside Fortress Europe: Strategies for the Global Market was published in December 2018 in anticipation of Brexit occurring on 29th March 2019. A limited-series weekly commentary, The Global Business Strategy (GBS) Blog, was published every Friday from 1st March through 3rd May 2019. It combined extracts from Outside Fortress Europe with analysis of international business issues and global strategic management challenges which appeared in the business news headlines during each week.

Seven academic essays focusing on globalization, competitive strategies and organizational change were also drawn from the book and posted in unabridged form. A peer-reviewed compilation of selected posts and four essays was curated and this is presented within The Global Business Strategy Album tab on the Main Menu.

As the project progressed a key observation made was the extraordinary lack of preparedness of UK companies for whatever ‘Brexit’ would be ultimately determined. There seemed to be a ‘wait and see’ attitude amongst businesses as the political process for implementing Brexit following the delivery of the essential Article 50 notification to Brussels meandered along its long and winding road to who knew where.

But regardless of political contrivances and controversies, ‘waiting and seeing’ is not a good platform upon which to build a long-term effective and efficient global business strategy for any organization, regardless of country of origin, business sector or company size.

Companies should be preparing now for exploiting the opportunities which international business developments might bring as new trade deals are struck, while at the same time building barriers against the looming threats from an uncertain and nervy customs relationship with the EU following the post-Brexit transition period.

Furthermore, British firms pursuing purely domestic business strategies should bolster themselves for the fierce competitive winds that those newly-negotiated international trade agreements will bring to the UK market:  after all, ‘free trade’ is a two-way street – see the ‘Bonus Track essay’, Be careful what you wish for… on The Global Business Strategy Album.

Following the general election of 12th December 2019, there has been a definitive break in the long-running Brexit stasis and the UK left the EU on 31st January 2020. During a Coronavirus-blighted negotiation phase since then, the final ‘deal’ was agreed upon by 31st December 2020. Like all messy divorces, there will be an uncomfortable transition as the former partners find their feet (and their friends) in its aftermath. But long before then, companies should have their strategies, plans and contingencies in place. That global business strategy challenge is exactly what the Outside Fortress Europe Research Project publications aim to address. 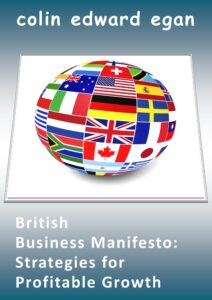 British Business Manifesto
A forthcoming book, British Business Manifesto: Strategies for Profitable Growth, has been derived from The Outside Fortress Europe Research Project and is scheduled for publication in April 2023. It has been written for a practitioner/functional-specialist readership and is ideal for a Small and Medium-sized Enterprise (SME) / Strategic Business Unit (SBU) management audience.

In the post-Brexit, post-Covid era, the opportunities for British SMEs to design successful and profitable competitive strategies are potentially huge. To take advantage of these they must adopt a structured and systematic approach to business strategy, marketing, innovation and branding, with these management processes supported by operational excellence for enhanced productivity.

Firms should be preparing now for exploiting the ‘strategic windows’ that international business developments will bring as new trade deals are struck. Equally, British companies pursuing purely domestic business strategies should bolster themselves for the fierce competitive winds that those newly negotiated global trade agreements will bring to the UK market:  after all, international free trade is a two-way street…

For details on this book and related SME Business Strategy events please navigate to britishbusinessmanifesto.com (website opens in a new tab/window).

To view a downloadable PDF copy of the British Business Manifesto: Strategies for Profitable Growth website, including chapter contents and synopses, please click on the PDF icon to the left/above. The document will open in a new tab/window. 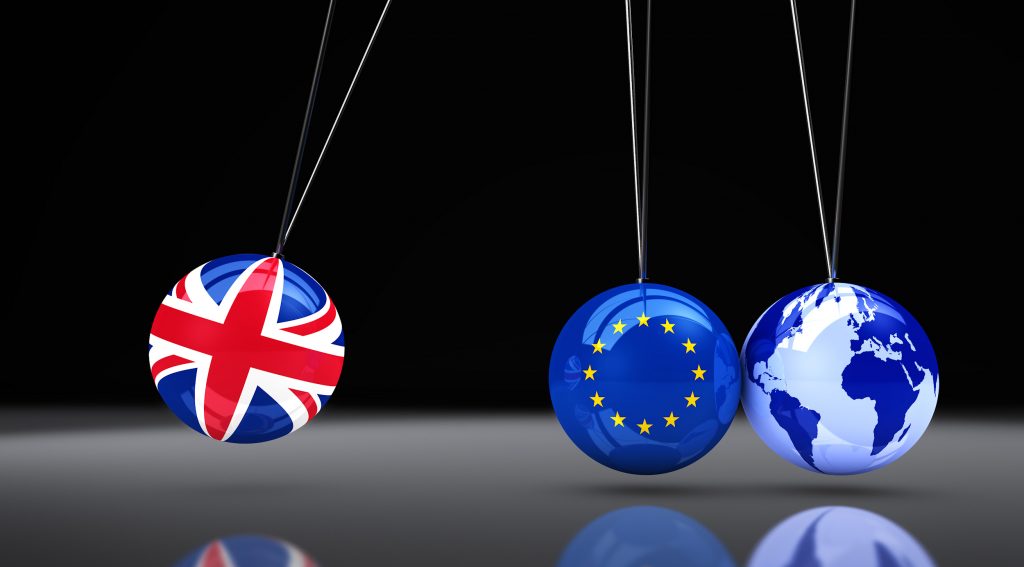 Outside Fortress Europe
Strategies for the Global Market.

Outside Fortress Europe: The Book (2e)
Second edition book details, including sample chapter content and extracts from the Appendix, Milestones in the History of Globalization.